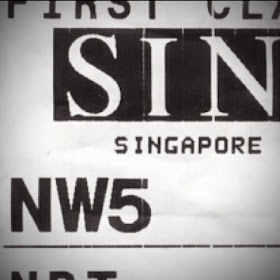 Singapore's a curious place. A tiny island state with few natural resources, this financial leviathan is famous for its food, cleanliness, its order, safety, its zoo and, now, for a bundle of shiny new things like Marina Bay Sands, the Supertree Grove in the Gardens by The Bay, it even has a massive ferris wheel - an important attraction for any serious city these days.

I first visited in 2000 and really thought nothing of it. To be honest, at the time, it was probably the dullest place I'd ever seen. It was a flying visit. Literally a weekend. After a walk through Bugis Street, a Kodak moment by Raffles, a quick stop down by the waterfront to see the famed Merlion statue - the mythical beast with the body of a fish and the head of a lion - and a bite to eat (albeit a sensational one) at a hawker centre, by lunchtime we'd pretty much ticked off everything we thought worth seeing.

My experiences in other Asian cities had been different. Very different. In Hong Kong and Bangkok the gateways into the noise and nasty that's often waiting for you just below the surface are well lit. Welcome stranger…come on in and play.

But not Singapore. Clean. Neat. Prim and proper. And done in a day. If there was an edge to this city, I couldn't find it. I don't think we liked each other very much at first. As a speed-date, it was a disaster.

In the years since, I've been back a couple of times. And I must admit that I feel like we're much more comfortable in each other's company now. Barriers and expectations seem to have gone. We get on. The façade has dropped a little. Maybe we've both changed. 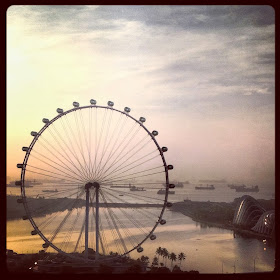 Most recently, I caught up with an old school mate living there over a bite to eat before a late night flight home.  He pulled up in a cab. You want something local? A no-brainer after days of hotel bars and buffets.

Singapore's Geylang district is a neighbourhood of laneways and streets buzzing with temptations aplenty. There's food everywhere. The bang and clang of woks in steamy kitchens, and the clatter of chopsticks on plastic bowls and plates. Neon, noise and an unease in the daytime that is swallowed by the night as the place comes to life. 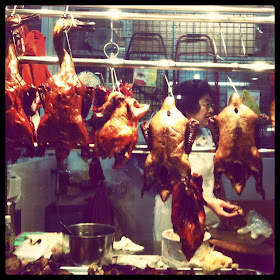 The skies opened up the moment we stepped out of the cab still a few blocks from No Sign Board. Lightning. Thunder. Chaos on the roads. On our slip-sliding walk through the crowds huddled under shop awnings my mate points out a particular quirk of Geylang.

The odd numbered streets are full of restaurants. The even ones are where you go to satisfy another kind of urge. Hello, edge. 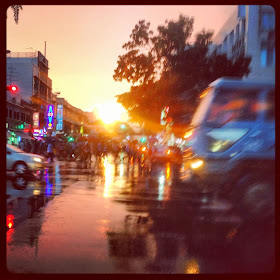 No Sign Board was heaving. Dinner was incredible. Piles of crab, a plate of minuscule squid fried crunchy, noodles, rice and a token serving of greens, washed down by just the right number of really, really cold Tigers. We laughed through the more than 20 years that have passed since we left school and then, way too soon, I had to dash to make my flight. 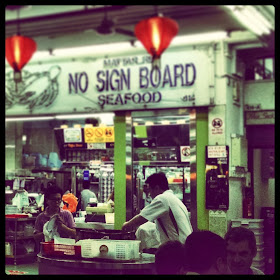 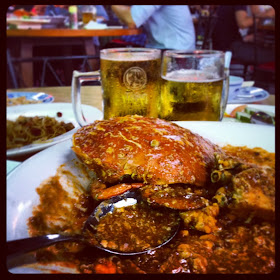 We asked the cab driver to take us down an even laneway or two for a voyeuristic glance into the dens of iniquity that line these streets. Two guys in the back of a slow-moving cab peering into doorways, holding a puzzled gaze with security for a moment before trundling by. Not dodgy at all. Unexpectedly, my mate asked the driver to pull over before scurrying into one of these places. I watched him have an animated conversation with the gate-keeper before dashing away out of sight down a corridor. An unexpected development, indeed.

Minutes later he returned grinning. That's better. Here we were, right at the edge and he'd leaped off - as it turns out - to take a pee.

A few hours later, peering out of the aircraft window with Singapore racing away below, I pondered how far Singapore & I had come since that first, frosty encounter all those years ago. Underneath the high-buttoned, conservative exterior is a neon-fueled pulse that throbs to a dangerously different beat. One revealed slowly in a burlesque feather-dance with each Singapore fling.

Regal and proud above the surface, scales and slipperiness below.

She's such an exquisite tease, this Merlion. 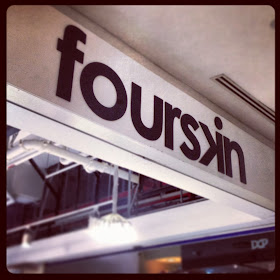